It's also very heavy and needs something special in order to display it properly. We decided to engineer a stunning cradle designed with our Siemens NX Software Cad/Cam Programme

We dowloaded the programme on to our 4-axis Dugard Vertical Machining Centre:

After a few hours it was certainly starting to take shape:

It wasn't long before the Ettore Bugatti logo and emblem became clearly visible:

Our engineers have really high standards and their attention to detail is second-to-none. Here is the machine working on the lettering during the refining stages 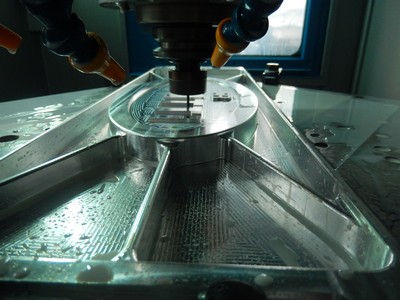 And here it is during the final moments of machining

Here is the base plate just before the final assembly

Now you can see the fine level of detail. It would have been much easier to leave it with a plain, smooth surface - but we're not like that at Gentry Restorations 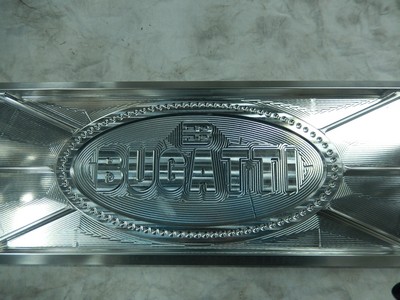 Prior to making the base plate, the engineers had already manufactured the rather elaborate vertical supports:

Our engineering skills might be excellent - but we admit we're not the greatest photographers:

The hardest part was lifting the crankshaft on to the stand - it's much heavier than it looks:

Eventually the crankshaft and stand were put in place in our reception area. The two items have been admired immensely by our many visitors